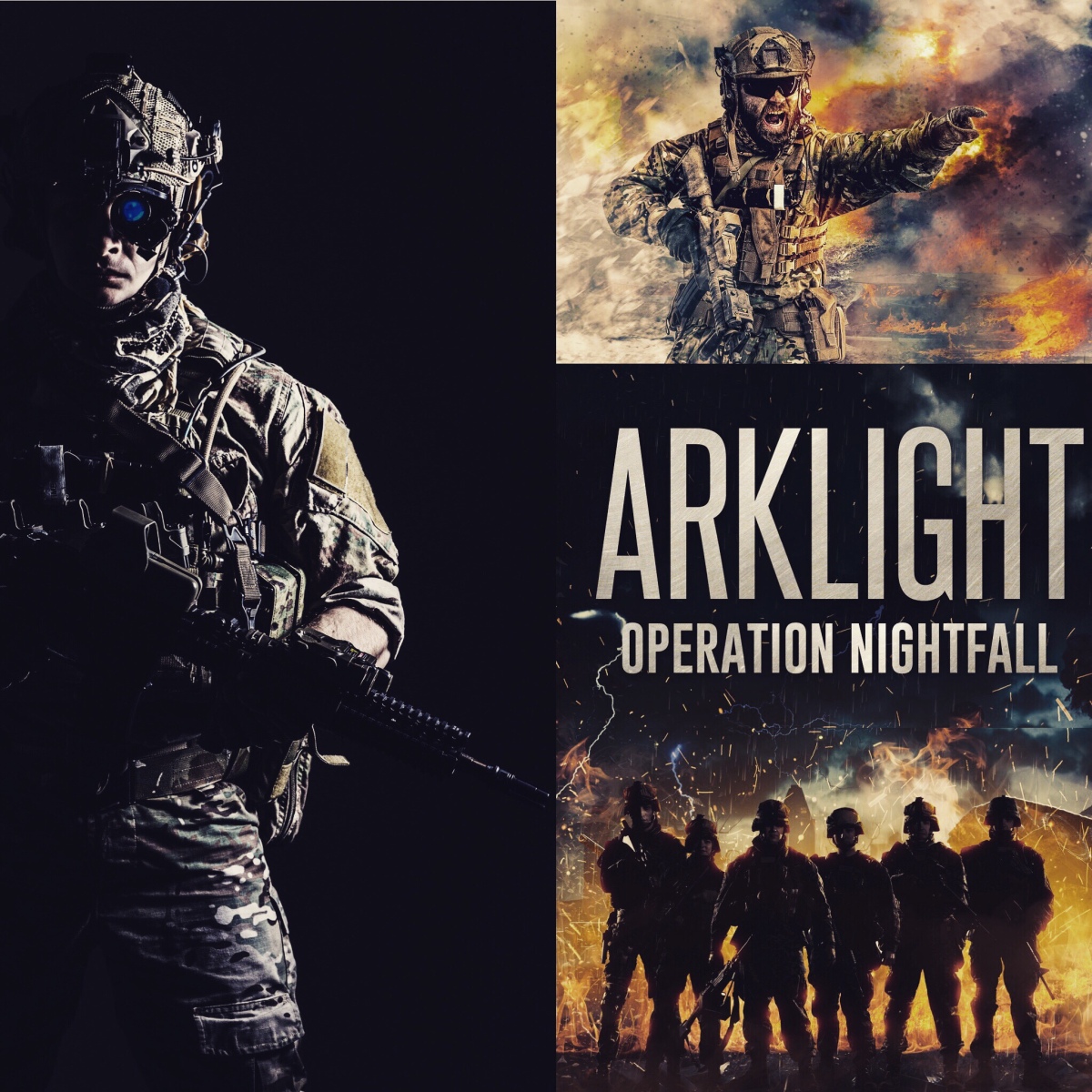 Now through April 18th, Get book one, Arklight: Operation Nightfall for only .99 Cents on Amazon. All eBook copies are only a buck! This is to celebrate the completion of the final book in the trilogy, Arklight: Task Force Crusader. The final book is almost two entire novels told in one heart-pounding action thriller. Just follow the link below and get your copy for cheap today. This multi-genre story won the Readers’ Favorite Bronze Medal for Christian Thrillers in 2018.

With 30 Amazon reviews and still counting, Nightfall sits at 4.7 of 5 stars. Here are few of the reviews:

Self Publishing Review called it, “Memorable and Impressive!”

Get a copy while they’re on special! If you like action movies, this should feed the need! 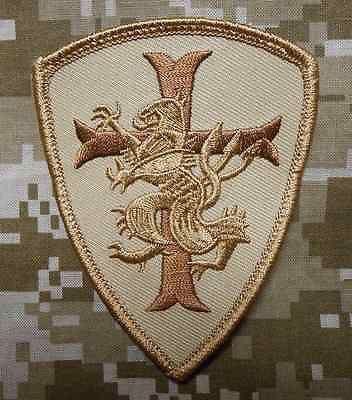 I had to look up a couple of novels that I knew were distinguished in both content and length. For instance, J.R.R Tolkien’s books are epic, some of them extending beyond 140,000 words in length. Arklight: Task Force Crusader is now in rewrite mode where it will inevitably swell, then shrink, through the editing process. After today’s progress, it sits at a comfortable 128,000 words, give or take a few. Not Tolkien territory, but it’s pretty close. So who cares, right?

Amazingly enough, Arklight has a modest fan base and I thought it worth mentioning, since the previous two books came in around the 85,000 word mark. This story is going to have an epic beginning, middle, and end that should hook everyone in. I’ve condensed what could have easily been two books, into an information-packed action-junkie frenzy that should delight any reader. The historical accuracy will keep your Wikipedia searches ablaze, while the story takes you on a journey to the very end – the end of all things. Yeah, the stakes are larger than life!

I’m looking forward to hearing from the beta readers already, and I’m still a couple of months away from that stage of the process. This story loops factual history through a maze of well-known conspiracy, following Biblical prophecy from the Crusades into the modern day. Spear Team is getting ready for one last ride into the depths of discovery this summer! Magnus is hot on their heels. Task Force Crusader is coming at you in full force!

Look for the award-winning Arklight: Operation Nightfall and the recently released sequel, Arklight: Force Interdiction on Amazon and Amazon Unlimited. The final installment of the trilogy, Arklight: Task Force Crusader will released sometime this summer! 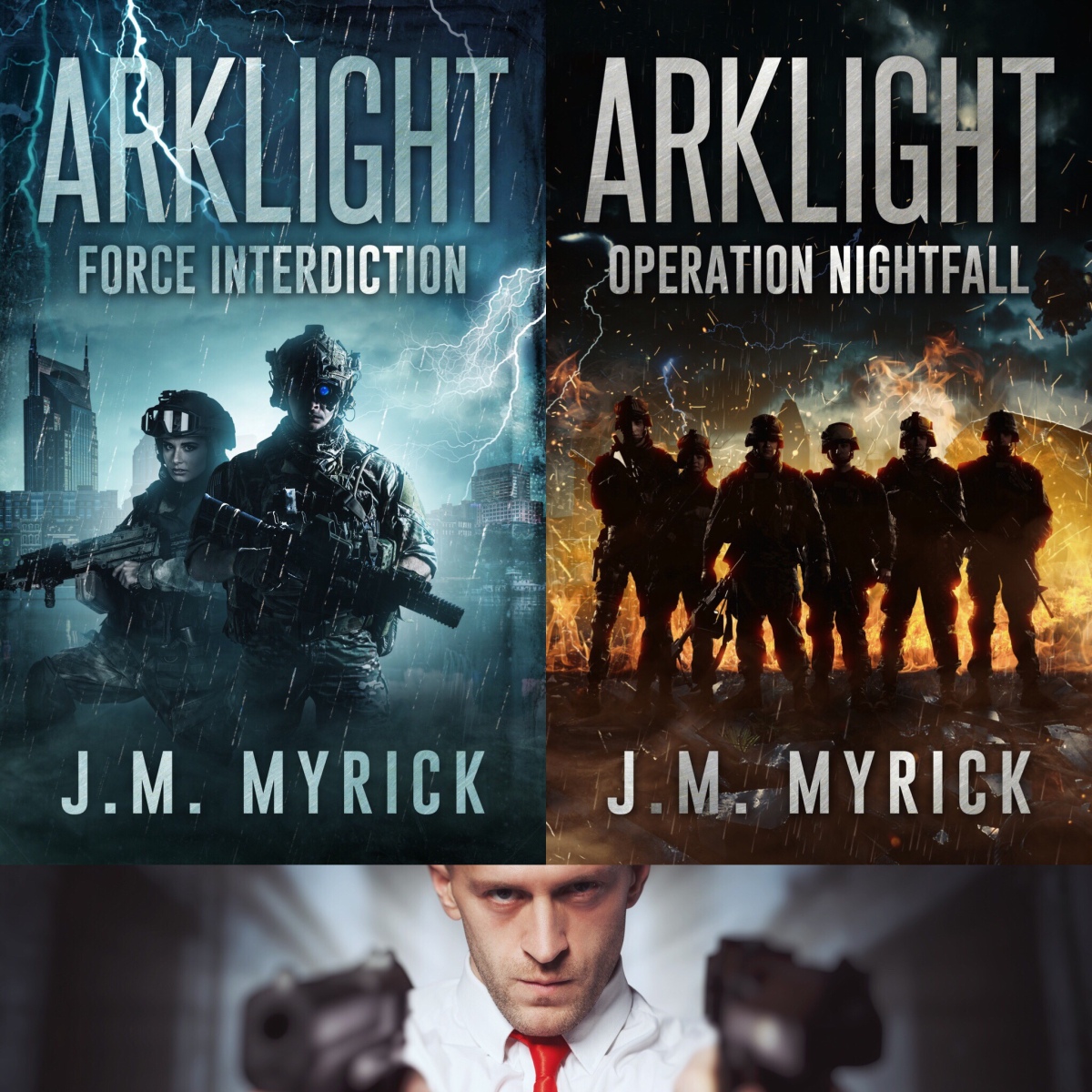 While you’re at it – enjoy a Special Kindle Countdown Deal on the NEWLY RELEASED Book 2 –  Arklight: Force Interdiction starting at ONLY .99 Cents! Yeah, you heard me. Both books for only .99 cents through this weekend!

50% of all proceeds will go to worthy charities around the world! Free and countdown deals only apply to the kindle ebook versions of the Arklight book series.

I’ve gotten many requests to add some references, definitions, and explanations to the Arklight story. I’m happy to announce, that box is checked, thanks to Amazon Kindle’s X-ray feature. It works very similar to the Amazon Fire TV system, in which it allows the viewer to look up the cast, history, terms, and other information about the novel. X-ray works on Kindle readers and the Kindle app, so it’s very user friendly.

I have gone through both, Operation Nightfall and Force Interdiction , adding over 200 links to historical events, locations, characters, military terms, and units. It is my hope that this detailed information will enhance the reading experience. I also hope that the reader will realize the true scope of the sacrifices made by some very heroic people. Men like Eugene Fluckey, John Bell, George Patton, and many others faced impossible odds and defeated a terrible foe in Nazi Germany.

So, enjoy the books and leave me some reviews. The third and final Arklight book, Task Force Crusader, will be out sometime in 2019. Thanks to the readers!

It’s been an incredible Labor Day weekend! Operation Nightfall won a Bronze Medal in the Readers’ Favorite international book competition, and Force Interdiction had a great review from SPR! Here’s what the professionals had to say about Arklight: Force Interdiction: 4 1/2 out of 5 Stars!

“Novels that could easily fit into 5 or 6 different sections of a bookstore don’t come around very often. Arklight: Force Interdiction by J.M. Myrick is one such creation, a sweeping and creative ride that transcends time, heroic ideals and the traditions of genre.

The plot and premise that Myrick began with Operation: Nightfall is sharpened and expanded in this sophomore offering, with the ancient weapons of the Knights Templar once again being fought over, and the fate of humanity hanging in the balance. Many of the same compelling characters from the first book reappear on Spear Team, the special ops group around which this novel centers.  Myrick also maintains the same delicate balance of action, philosophy, spirituality and suspense that made the opening salvo of this series such a success.

This book has a far more ambitious edge than its predecessor, in that time is now a malleable variable and scenes take place in different time periods with different special ops groups. This temporal disparity could have made the plot difficult to follow, but Myrick has a clear and powerful vision for this series, and a broad enough perspective to keep the plot lines smooth and the holes minimal.

The level of detail in these different time periods, and the shifting tone of the prose, are equally impressive, particularly between soldiers separated by centuries. Even with that broad space to work in, the theme and message of the story remains strong throughout – protecting the oblivious citizens of the world from the evil that lies waiting in their midst.

One of the weak points in the novel is the character development, as Myrick seems more concerned with plot complexity and ensuring that all the pieces fit, rather than focusing on whether the characters are the most believable vessels for such a story. Some of the key characters receive ample attention and have well-constructed interactions with other players, but many others seem like caricatures of recognizable “warriors” and don’t seem to grow or evolve throughout the course of the book. A bit more time spent on creating cohesive relationships between characters (in all relevant time periods) would make the read more engaging and increase reader investment.

When it comes to the technical side of the novel, the editing is solid and the prose is tight. The dialogue is one of the strongest pillars of the book, utilizing the rough-around-the-edges attitudes of hardened soldiers, but also finding time to explicate larger issues and philosophical debates in a natural way. The visceral descriptions of visually striking scenes are also impactful and succinct, and perfectly placed to welcome readers into a new place (or time).

While keeping track of all the varied events between the centuries makes this read a bit demanding on one’s attention, the end of the novel is very satisfying, and readers finally see how all of the pieces fit together. That sort of well-planned payoff – as well as the promise of more books in the future – makes J.M. Myrick an exciting voice in science fiction, and in his own unique genre.”

There’s always something you can do better, and I’ll certainly work hard to improve my craft. However, the takeaway here – “My own genre” – WHAT?! That’s a pretty solid complement, considering I set out to redefine how a book can be perceived. To some, Arklight is science fiction – to others a thriller. It certainly contains those elements, as-well-as Christian-based fiction, action-adventure, historical fiction, military and some have even suggested it to be something entirely different – a hybrid-screenplay. Isn’t that what a novel should be? Something new, or unusual, written in a fictitious prose?

I’m just starting down this path. It’s a path built upon my past, but my past will not define my future. I might stop writing tomorrow, but I can feel it… God is trying to teach me something on this journey. Whatever that may be, I’m listening harder than ever before. Wherever this leads, I’m thankful and it has purpose. Whoever I can positively impact through my story, I’m ready. As a good friend, teammate, and writer once said to me, “Here’s to the journey!”

My debut novel, and 1st book in the series, Arklight: Operation Nightfall has won the 2018 Readers’ Favorite Bronze Medal for Christian Thrillers. It was an inspired tale that came to me in such a way; it begged to be written. I am very honored to receive a major international award. I have entered Arklight: Force Interdiction in the 2019 competition, so I’m hoping for much of the same!

I’m really happy to announce that Operation Nightfall will be on display at the Miami Book Fair, November 11-18, 2018, by Readers’ Favorite. My book placed third out of thousands of submissions and that’s a pretty awesome milestone. I hope to have the final book in the series through the initial write by sometime in early 2019. For now, I will seriously enjoy this moment!

What an honor! To have Operation Nightfall WIN an International Award is awesome! Thanks to everyone for their support and I look forward to seeing how Force Interdiction fares in 2019. I have much appreciation for the readers! Thank you!

I guess I’ll be off to Miami to become an award-winning author. Sweet!

After much thought, internal discussion, and plotting, the Arklight story will end with book 3, Task Force Crusader. The story was originally planned for 4-5 books, but I’ve grown to appreciate heart-pounding, pulse-pumping action. That means book 3 will be much longer than the first two, essentially packing the last phases of the story into a mind-boggling ending. The good news, I’m already well into the initial write, and I don’t think it will take very long to finish.

The readership has grow exponentially since Operation Nightfall hit #1 on the Military War Thriller Free list on Amazon. It almost topped three different categories that weekend. Force Interdiction is still getting off the ground and I’m expecting a review from SPR any day now. Fingers crossed; they usually don’t pull any punches. Hoping it fares well.

Stay tuned for some cool upcoming features of the Arklight story. Get your copy of Force Interdiction today!

On another note, I’ve started a new project that’s different and interesting. I can’t wait to pull from all of the stories floating around in my head. To words; cop stories. Finally, thanks to the readers! 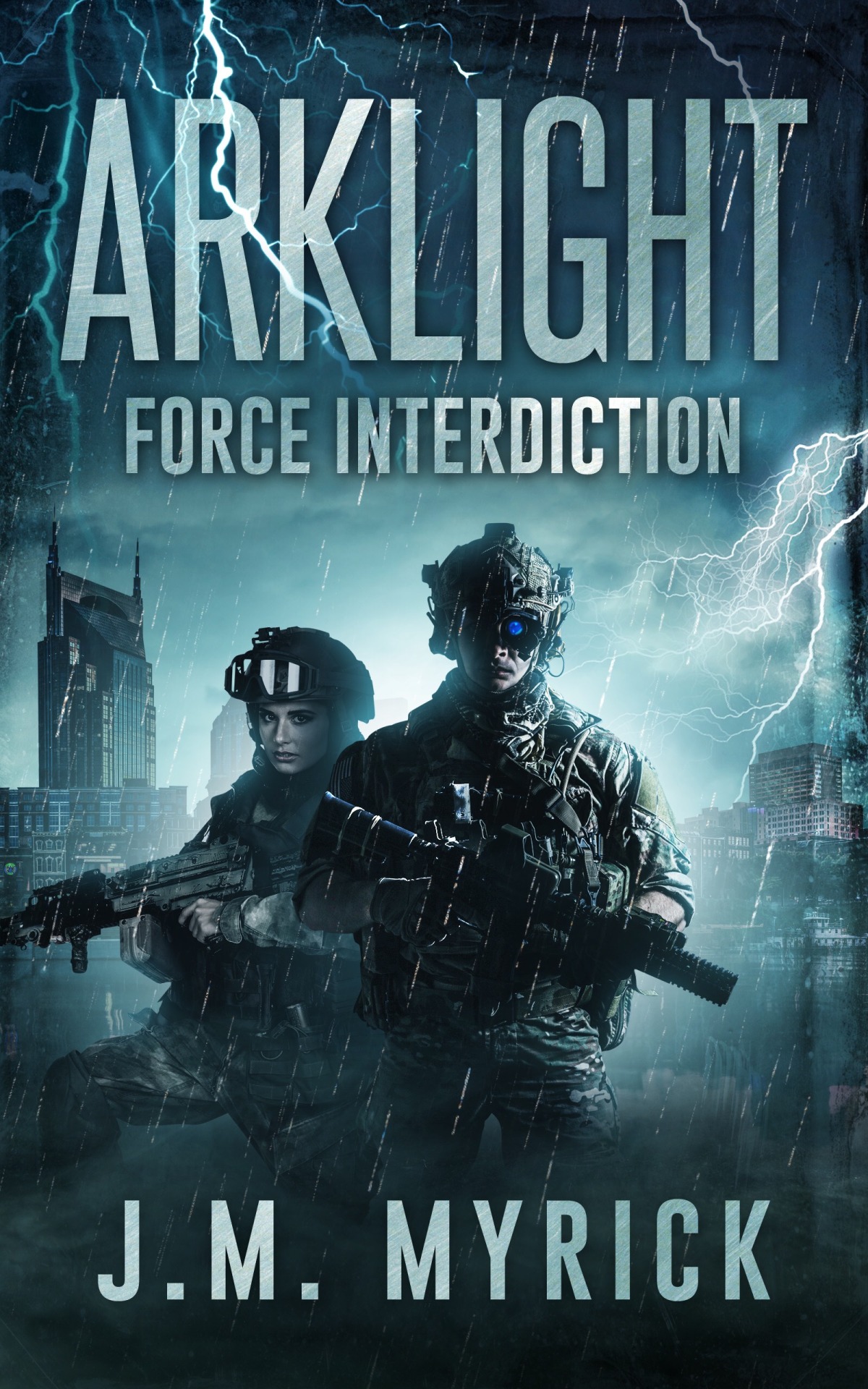 After an awesome promotional weekend, Arklight: Force Interdiction is available TODAY for purchase on Kindle and Paperback! Operation Nightfall went to #1 on Amazon’s Military Thriller free list over the weekend, so don’t miss the follow up to that incredible story! Interdiction uses Nashville’s diverse civil war history to create an awesome backdrop to the story. A new mission awaits!

This installment brings back Spear Team as they attempt to locate another piece of the ultimate weapon. The appearance of Magnus O’Keefe has deadly consequences. The Alsos Mission team learns the importance of the Knights Templar journal, and they follow up on one of it’s secrets in WWII. Find out the importance of the Ghent Adam panel code and what’s really at stake.